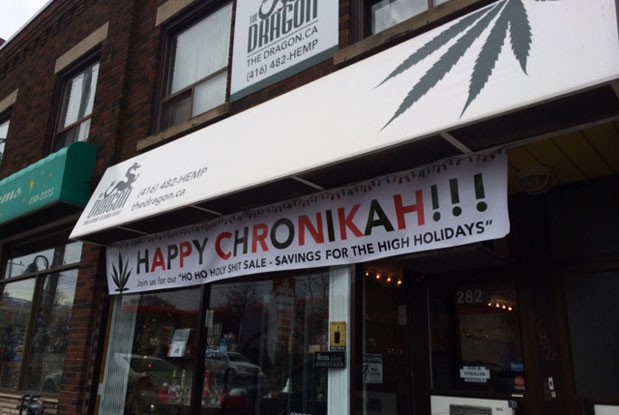 As business owners around the city gear up for the holidays, one store at the corner of Eglinton Ave. and Avenue Rd. is spreading some dubious holiday cheer.

The Dragon, a store that specializes in hemp products and cannabis paraphernalia has a large sign wishing customers a “Happy Chronikah!” To the uninitiated, that’s a mix of “Hanukkah,” the Jewish festival of lights and “Chronic,” a popular slang term for marijuana. Impressive as the pun may be, the sign is raising a few eyebrows.

George S., a salesperson at The Dragon, says the “vast majority” of the feedback he’s been getting from the locals has been positive. He says that in the two weeks since the sign was put up, the store has only had one complaint.

“We know we’re in a progressive neighbourhood where (residents) can handle this kind of sign,” he says. While he appreciates that some older residents may not enjoy the pun, the average Dragon customer is in their mid-thirties, he says, and generally pretty laid back.